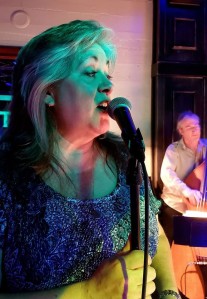 I’ve been singing since I was a teenager growing up in Southern Oregon.  My musical roots began with a cappella Gospel with my sisters and in community theater.  As a teenager, I toured Europe with a youth orchestra.

I later returned from the UK and finally settled  in Southern Oregon. I work hard to keep up with my bands, appearing at many local venues with them, and with several other groups.